No two generations are the same. The Bible affirms that generations come and go but the earth abides forever.

ECCLESIASTES 1:4
One generation passeth away, and another generation cometh: but the earth abideth for ever.
The greatest mistake that we can make is to compare generations with each other thereby losing sight of each generation’s specific place in the eternal scheme of things.

Sometimes you see young men and women in ministry who have been so misinformed about a particular generation and that affects their attitude and disposition towards that generation.

The devil specializes in creating bad publicity and uncharitable propaganda around a man of God or a generation such that people’s estimation of such servant of God or generation becomes severely affected.

In the light of God’s eternal expectations, we must know what to relate with in a generation.
It is the goal of the enemy to focus our attention on “human frailties” and not on the “treasure” that each generation carries.

To say this emphatically, no matter what we might consider to be “imperfections” in a generation, the truth still remains that every generation since ages past has significantly contributed its own quota to the expansion of the Kingdom.
It is sophisticated Satanic deception to think that our generation is “better” than the generation of the fathers. That is a blatant lie from the pit of hell.

We’re only privileged to be alive at this momentus time in human history when opportunities for World Evangelization abound like never before.
Every generation has a specific assignment from God and that contributes significantly to the value chain of God’s eternal plan as unveiled from generation to generation.

No one single generation knows it all, just like no one single minister knows it all. God has given a measure of light to each generation and that is their trademark.
It’s important to realize that the move of God is progressive. The move of the Spirit does not come to overwhelm people.

Sometimes it is here a little, and there a little, until the full blown manifestation – Isa. 28:10.
To God, the most important thing that we should look for in the generations before us is THE MAGNITUDE OF DIVINE INVESTMENT in those generations.

It is the will and pleasure of the Father that we relate with the DIVINE INVESTMENT in each generation – the deposits of Grace and measure of God’s workings in a generation; not the human frailties in the actors.
That is the order, and it is also validated by Scripture:

PSALM 78:2-7
2 I will open my mouth in a parable: I will utter dark sayings of old:
3 Which we have heard and known, and our fathers have told us.
4 We will not hide them from their children, shewing to the generation to come THE PRAISES OF THE LORD, and HIS STRENGTH, and his WONDERFUL WORKS that he hath done.
5 For he established a testimony in Jacob, and appointed a law in Israel, which he commanded our fathers, that they should make them known to their children:
6 That the generation to come might know them, even the children which should be born; who should arise and declare them to their children:
7 That they might set their hope in God, and not forget THE WORKS OF GOD, but keep his commandments:

This order runs through like a thread in Scriptures. If we look out for something else, we will come to a place whereby the more we look, the Iess we see.
We only tread the path of wisdom by learning from the “imperfections” of generations before us and not make the “imperfections” as a basis to disconnect from THE GREAT WORKS that God did during their time.

Truth is that NO MAN IS INFALLIBLE, for we have THIS TREASURE in earthen vessels that the excellency of the power may be of God and not of us – 2 Cor. 4:7.

Quote me anywhere dear friend; there’s no man or woman whom God used mightily through out the history of the Church that did not have one kind of “imperfections” or the other, yet it didn’t stop God from using them.

All of us are a work in progress, and the moment we realize that the most important thing is to relate with THE TREASURE or DIVINE INVESTMENT in each generation, we have already broken the devil’s back.
I look at some young men in ministry today; all they’re looking for in each generation is DOCTRINAL ACCURACY, and that’s like building a castle in the air.

There were generations before us that were not well versed in apologetics and Pauline revelation but the “only thing” that God could use to get through to them were physical emblems and symbols that they could relate with.

As a matter of fact, some great revivalists of the 16th, 17th, and 18th centuries that we talk about didn’t believe in speaking in tongues or supernatural flow of the gifts of the Spirit, yet God still used them mightily anyway.

Infact, I know a great evangelist of the 20th century that didn’t speak in tongues for many years yet he was used mightily by the Lord anyway.
Now, things have changed. The times and seasons are not the same. Many believers all over the world speak in tongues today and manifest the gifts of the Spirit.

You see, the move of the Spirit is progressive. God does not destroy the former glory to bring in the latter glory. No, He surpasses the former glory with greater glory. Glory to God!
Friend, what do you see in the fathers? Their humanity or the treasure that they carry from Heaven? Their “imperfections” or the weight of divine investment upon them?

Every man of God carries a divine treasure from Heaven, and please don’t ever forget that.
Every generation has its area of strength or “competitive advantage” as it is used in the business world.

Our generation is strong in doctrinal exegesis, charismatic ministry, ministry networking, faith confessions, use of technology, etc.
Now there are MANY OTHER DIMENSIONS that each generation is very strong in but for want of space.

They understand New Creation Realities thoroughly plus THE CHARACTER of the Grace of God.
They don’t mess around the CONSECRATION that comes along with the message of Grace.
Now it is the will of the Father to take ALL THESE DIMENSIONS FROM EACH GENERATION and synergize them with His end-time workings as a divine precursor to the revelation of the glorious Church.

James talks about this in his letter:
JAMES 5:7
Be patient therefore, brethren, unto the coming of the Lord. Behold, the husbandman waiteth for the precious fruit of the earth, and hath long patience for it, until he receive THE EARLY AND LATTER RAIN.

Prior to the Coming of the Lord, we shall experience what I call A CONVERGENCE OF END-TIME ANOINTINGS i.e. THE CONVERGENCE OF THE EARLY AND THE LATTER RAIN.
That’s why it’s very important to understand that what you relate with in each generation is the INVESTMENT of God upon them.

Sometimes people are not as “bad” as painted when we view them in the light of God’s eternal plan.
Many things have been said about great men like William Branham but the same man’s ministry inspired T. L. Osborn’s ministry in the miraculous.
T. L. Osborn was a frustrated missionary in India after a fruitless time of ministry.

He came back to America and attended William Branham’s meeting where he saw raw miracles and he said it’s like he heard a thousand voices telling him, “You can do the same thing”, and that was the turning point in his ministry.
He went back to India and it was fire – a mighty conflagration . Glory to God!
I have books in my library by William Branham (his transcribed messages in book form) and they’re great materials.

I remember reading one of them titled, “THE UNVEILING OF GOD” and also listening to the tape and what I saw in that man was a heart of meekness.
I read books by Pastor E. A. Adeboye and Pastor W. F. Kumuyi among many other books by other great men that I read while growing up and they blessed me a great deal.

Pastor Adeboye’s book titled, “THE HOLY SPIRIT IN THE LIFE OF ELIJAH” was fire in my bones!
And then, the first time I read a book by Apostle Joseph Ayo Babalola (a transcribed messsge) on Fasting, I first dropped it. I didn’t want to kill myself.
The things Baba was sharing in that book could only be a product of encounter. And then I picked it up later.

Friend, THESE MEN CARRY SOMETHING. What do you see? If what you’re expecting from them is to break Hebrew and Greek or tell you the etymology of Old and New Testament words, so be it.
For the record, you can’t say that the fathers don’t understand doctrine at all. No No No! That’s not correct!

The dimension of revelation they bring to the table is a plus to all of us, and then we move on from there because knowledge increases generationally.
What we must not allow is to let our narrow expectations pigment our revelation of the INVESTMENT of God in their lives such that we disconnect totally from the workings of God in their lives.

Those who did such in the past have not had “too good” stories to tell. We’re not wiser than God. No single man or generation can do it all.
We need each other. Let’s not allow bad publicity around a genuine servant of God or Satanic propaganda around a generation make us lose sight of the eternal workings of God, which are ordained for our lifting.

As I close, please note that these realities are incontestable:
* The humanity of men is a fact – we’re all work in progress!
* The divinity of God’s investment is eternally constant – we all carry treasure from Heaven!!
* The perpetuity of God’s move is Heaven’s project – the move of the Spirit is progressive, and it is perpetuated generationally!!!
The big question; WHAT DO YOU SEE IN THE FATHERS?
May the Lord help our generation to stay within the boundaries of God’s eternal plan for the Church.
Amen!!!
Trust this is a blessing Sirs and Mas?
Maranatha!!!

60 years ago our fathers and predecessors fought together as one to strive for our freedom and independence in hope and vision that we would be able to decide for ourselves,and also make good decisions through good leaders and build a Nation where our children can have a better and great future,a Nation where peace […]

ADMIT THAT SOMETHING IS WRONG AND DO SOMETHING ABOUT IT URGENTLY!-Pastor Paul Enenche To Nigerian Government 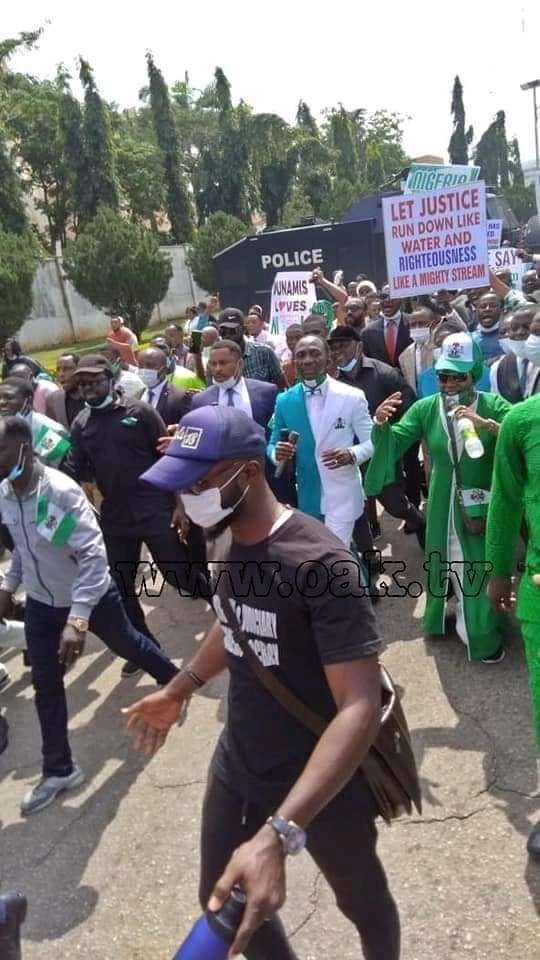 Prays for NigeriaLeads Walk Dr Pastor Paul Enenche of Dunamis International Gospel Centre on Monday, led a prayer walk for Nigeria. Enenche, who is the Senior Pastor of Dunamis led the walk from the National Christian Ecumenical Centre, Central Area, Abuja by 8 am.The Dunamis Pastor alongside his wife, Becky led thousands of Christians and […]