JERUSALEM, Israel – Israeli archaeologists unveiled a rare collection of column heads from the First Temple period at the Armon Hanatziv promenade in Jerusalem.

These stone artifacts made of limestone are adorned with ornate carvings and date back to the time of the Judean kings. Experts believed they are remnants of a grand mansion that overlooked the Temple Mount and Jerusalem’s Old City.

The three-pillar heads – or “capitals” – are carved with an ancient symbol representing the Jewish kingdoms of Judah and Israel. The same symbol is printed today on the five shekel coin in Israel.

“This is a very exciting discovery. This is a first-time discovery of scaled-down models of the giant Proto-Aeolian capitals, of the kind found thus far in the Kingdoms of Judah and Israel, where they were incorporated above the royal palace gates. The level of workmanship on these capitals is the best seen to date, and the degree of preservation of the items is rare,” said Yaakov Billig, Director of the Israel Antiquities Authority’s excavation. 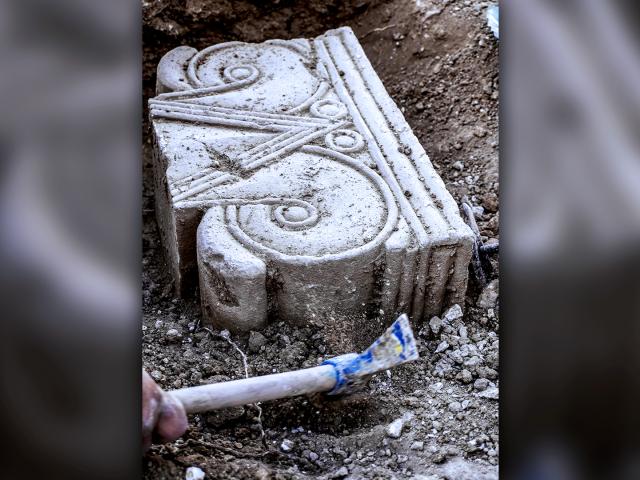 Researchers believe the mansion was built between the reigns of kings Hezekiah and Josiah, after the Assyrian siege of Jerusalem in 701 BC. While the pillar heads are in excellent condition, the rest of the building was demolished.

Billing says this recent discovery, along with other archaeological finds in Jerusalem, reveals what the city was like after the Assyrian Siege.

“This find, alongside the palace that was found in the past at Ramat Rachel and the administrative center found on the slopes of Arnona attest to a revival of the city and leaving the walled areas of the First Temple era after the Assyrian siege,” which ended in 701 BC, he said.

“We find villas, mansions, and government buildings in the unwalled areas outside the city and this attests to the relief felt by the residents of the city after the siege was lifted.”

Hili Tropper, Israel’s Minister of Culture and Sport, said the archaeological discovery is a window into the Jewish people’s history and future.

“The uncovering of the remains of the building reflects the glorious roots of the Jewish people and our rich past here in the capital city Jerusalem. I see great importance in the work of the Israel Antiquities Authority and in the work of the City of David in their discoveries over the years, which reveal parts of the illustrious Jewish past. The past is the cornerstone of a nation, and the cornerstone of culture and its discovery also affects the present as well as the future,” Tropper said.