Good morning Beloved. Today we’ll continue the series of teaching on the topic, “MARRIAGE OR MIRAGE?”.

For the want of space, constraints of time and so as not to belabour the point, I will not bother to go over some points that have been strongly emphasized in the Part One of this teaching.

I like to encourage you to meticulously peruse the Part One of this series of teaching so that you understand the background that we’re coming from.

Be that as it may, it becomes inevitably imperative to know that the contextualisation of this teaching is that many folks, in a bid to prepare for MARRIAGE, are invariably and indirectly preparing for a MIRAGE.

This,undoubtedly, is occasioned by insufficient information leading to poor preparation for marriage, and eventually, their marriages become a fiasco.
I once said at a meeting, “MARRIAGE IS A BOND, NOT A BONDAGE”, and that statement is without prejudice.
Also, MARRIAGE IS NOT MEANT TO BE ENDURED BUT TO BE ENJOYED.

Again, when you look at Ecclesiastes 4:9 which says, Two are better than one; because THEY have a good reward for their LABOUR…, we realize that MARRIAGE IS A UNION OF TWO LABOURERS, NOT THE COALITION OF TWO BUSY-BODIES.
Marriage requires intense labour, pruning, shapening, adjustment, discipline and diligence.

Neglecting these key facts in the build-up to marriage leads to assuming reality which is nothing but MIRAGE.
But we’ve got to DELIBERATELY, INTENTIONALLY and PROACTIVELY precipitate the dynamics of a happy and enduring marriage.

Having said that, let’s now look at the characteristics of a mirage.
SEVEN CHARACTERISTICS OF A MIRAGE
(1)FORM WITHOUT SUBSTANCE – 2Tim.3:5: It has a form but lacks substance. The form is there but the structure is missing.
(2) ATTRACTION WITHOUT REALITY – Matt. 4:8-10,1Pet.3:3-4: It is highly attractive and fascinating but upon drawing close to take another look, one discovers that it’s not real.
(3) EXPECTATION WITHOUT REALIZATION – Ecc.10:15: It’s like hope not realized that wearies the soul.
One very bad thing about a mirage is that one can wait and wait for a spontaneous change to happen until he waits “forever”.
(4) FALSE SENSE OF HOPE – Prov. 17:24: It’s like a fool who gazes into a distant future while not paying attention to current realities.
(5) ARTIFICIALITY WITHOUT ORIGINALITY – 2 Tim.2:20: It is often SYNTHETIC not AUTHENTIC.
(6) FALSE EVIDENCE APPEARING REAL – Ezek.12:24: It’s like a vain vision and flattering divination. It’s like something black appearing to be white. It’s a caricature.
(7) FADES AWAY WITH TIME i.e. TRANSIENT IN NATURE – 1 Pet.1:24: In other words, it is ephemeral.

Sometimes you hear people say in or before marriage that with time, things will get better, but they suddenly discover that indeed, things are actually getting worse with time.

The reason being that a mirage fades away with time because it is short-lived.
Now beloved, having briefly examined the seven characteristics of a mirage, we’re gradually getting into the mainstream of this teaching, and please I urge you to pay keen attention at this juncture because the next lap is like the nucleus of the matter.
We’ll now look at how to determine if a MARRIAGE has become a MIRAGE, primarily in the build-up to it and secondarily in the theatre of operation itself.

WHEN MARRIAGE BECOMES A MIRAGE – THE SIGNS AND SYMPTOMS
I will give you twenty-one signs and symptoms that show that a MARRIAGE has already become a MIRAGE.

In this part two, I will explore seven out of the twenty-one, and in part three of the teaching, we’ll examine the rest of them while part four will be the last lap of this teaching.
Now let’s examine the first seven:
The following are the telltale signs and symptoms that a MARRIAGE has already become a MIRAGE or is at least on the way to becoming a MIRAGE:

(1) WHEN YOU FOCUS ON THE PRIVILEGES OF MARRIAGE AT THE EXPENSE OF ITS RESPONSIBILITIES – Eph. 5:22-25,1 Cor. 7:3-5:
It’s sometimes amusing that the only picture of marriage that some prospective couples have are the privileges therein, chiefly among them is SEXUAL INTERCOURSE.
But after that, what next? A man may just be dreaming of how he’ll be enjoying coitus with his wife but he doesn’t realize that he’ll take certain decisions in marriage, put food money down, pay school fees for his children,take good care of his wife, take care of his parents and in-laws, lead morning devotions, train the children in the way of the Lord, lead an exemplary life and many other things.

Similarly, a woman may only be thinking of the prestige that goes with a married life especially among her peers and contemporaries and the fact that now she will be addressed as a “Mrs”.

Not only that, she may also have a sense of pride in flaunting her golden wedding ring around for the whole world to see but loses sight of the fact that she will be the home-keeper, she will cook meals, fix pampers for children, take care of the children, relate with visitors well, create an atmosphere of peace and tranquility in the homefront and what have you.

If there’s no balance of expectations in the build-up to marriage, there’ll definitely be issues every time.
Let me however state that there’s nothing absolutely wrong if couples can lend a helping hand to each other in the afore-mentioned responsibilities but that will not take away the fact that there’s role differentiation in marriage.

(2) WHEN COURTSHIP IS BUILT ON PRETENSE – Gen. 2:25: The Bible says Adam and Eve were naked and they were not ashamed.
This suggests that there’s meant to be openess and transparency in marriage, courtship inclusive.

Anywhere you see pretense, people will be under the pressure of performance; they always want to make an impression to keep people’s overrated estimation of them intact.
But beloved, that’s dangerous in courtship, because eventually, marriage will show everybody’s true level and pretense will no longer hold water.

Anyone who’s ashamed of you in courtship and finds it difficult to accept you the way you are (I’m not saying you should not develop yourself) will treat you like a trash in marriage. So friend, be real!!!
(3) WHEN DIFFERENCES ARE NOT HARMONIZED IN COURTSHIP – Amos 3:3, Matt. 18:19: I still believe that THE GREATEST FORCE IN MARRIAGE IS THE FORCE OF AGREEMENT.

Two cannot walk together except they be agreed -Amos 3:3. Marriage is not by FORCE; it’s by CHOICE.
Of course there are differences aimed at complementing one another and they are functionally necessary for the relationship.
But here we talk about extreme differences caused by dichotomy of initial exposure based on background, peer influence, social networks, etc.

These differences must not be wished away but harmonized in the light of God’s Word, because if not they tend to threaten the stability of the relationship.
(4) WHEN YOU BELIEVE THAT MARRIAGE IS THE KEY TO SPIRITUAL HAPPINESS – Psa. 16:11, Phil. 3:3, 1Thess.5:16, Phil. 4:4:
As odd as this notion may be, some people still nurse it. Here is a young lady who has been seriously maltreated and abused by her step mother, hoping that by the time she settles down in her home, she will be forever happy.
But friend, that can be a mirage.THE KEY TO SPIRITUAL HAPPINESS IN MARRIAGE IS INTIMACY WITH GOD.
It is God’s presence that brings the fullness of joy – Psa. 16:11. If you’ve already cultivated God’s presence in your personal life, then all other things being equal, you will be spiritually happy when you get married.

Some folks believe that marriage cures the problem of loneliness. But it doesn’t!
You see, friend, it is possible to be ALONE without being LONELY. The key is THE PRESENCE OF GOD.
For instance, before Eve came into Adam’s life, he was ALONE but he wasn’t LONELY because he had relationship with the Lord.
So, marriage doesn’t cure the problem of loneliness; the presence of God does!

(5) WHEN YOU OVERRATE THE CAPACITY OF YOUR SPOUSE – Rom. 12:3, 2Cor.12:7-9:
Sometimes out of love and over-excitement, someone can call his or her spouse an “angel” (and of course there’s nothing wrong in calling each other sweet names), forgetting that there are issues to be sorted out in the soulical realm.
That’s why we’re enjoined in Scriptures to continually renew our minds with God’s Word – Rom.12:2 which is able to save our souls – Jam. 1:21.
For example, no matter how anointed you are, THE ANOINTING DOES NOT REMOVE SEXUAL URGE, and every minister’s wife should pay attention to that and vice versa.
Our Lord Jesus just completed a fasting exercise which spanned for forty days and forty nights and one would have thought that he would be seeing visions immediately but what happened?

Satan spoke to Him and tempted Him in his three dominant areas of temptation, viz, the lust of the flesh, the lust of the eyes and the pride of life – 1Jn.2:16, Matt. 4:1-10 but thank God Jesus overcame them all.
So, don’t overrate your spouse but trust God in them and believe that their spiritual identity in Christ will be a reality in their soulical and physical life.

(6) WHEN WEAKNESSES ARE IGNORED IN COURTSHIP WITHOUT BEING DEALT WITH – 1Cor.9:24-27,Gal.5:16,1Jn.2:15-16:
I’m sure you must have heard people say “Ignore your weakness” but a more balanced and holistic approach is “Deal with your weakness”.
You can’t have a weakness of farting unabatedly anywhere anytime and you do that in the presence of your in-laws without control and not put your marriage in a bad light.

That’s just a mild example but there are many other funny things that people do and they say “that’s my weakness”.
Agreed but deal with it now before it deals a great blow on your marriage.

(7) WHEN YOU BELIEVE THAT MARRIAGE CHANGES PEOPLE – Rom. 12:2, 2 Cor.3:18, Isa. 9:8:
Marriage changes nobody; the Word of God does. What marriage does is that it AMPLIFIES what’s already on ground.
As a Pastor, over the years I’ve seen people who have refused to change by their marriages.

It takes intense labour in the Word to reconfigure and recalibrate some marital relationships but the good news is that it is not something unattainable or unrealizable. It’s definitely attainable and realizable.
Let’s therefore avoid a soft-landing approach or an escapist strategy in our quest to making our marriages work; let’s rather confront the issues head-on so as to have a MARRIAGE that will not become a MIRAGE.

Trust this is a blessing Sirs and Mas?
To Be Continued

END SARS: WHY ARE THEY ANGRY – Mike Bamiloye

Someone came to comment on the Post I made about # ENDSARS coming to an # ENDWELL , and the spiritual essence of all the # PrayerWalks and the # Intercessions . Then he was angry that we have turned the protests to religious prayer matter. He said we are no longer serious with the […]

Apostle Joshua Selman , RCCG In Support Of Peaceful EndSARS Protest, As Apostle Johnson Suleman Warns FG Against The Attempt To Unleash The Military On The Youth. 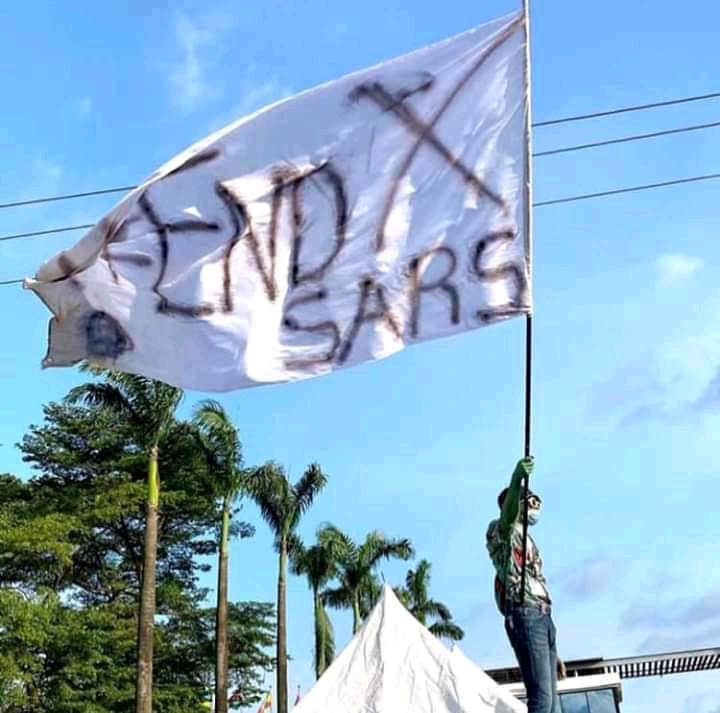 From the desk of our father and mentor Apostle Joshua Selman: O God of creation direct our noble cause… To build a nation where peace and justice shall raign.I stand with all RESPONSIBLE and WELL MEANING Nigerian youths, and indeed all those who love this great nation, to advocate for a new and superior approach […]