Mark 11:1-3
1. Now when they drew near Jerusalem, to Bethphage and Bethany, at the Mount of Olives, He sent two of His disciples;

2. and He said to them, “Go into the village opposite you and as soon as you have entered it you will find a colt tied, on which no one has sat. Loose it and bring it.

3.And if anyone says to you, ‘Why are you doing this?’ say, ‘The Lord has need of it,’ and immediately he will send it here.”

The colt had all along been tied down till the appointed time it would be needed. Therefore, while it was tied down beside the road, she would have seen a lot of other colts walking freely and at liberty to do whatever they wanted and to go wherever they desire without restrictions. They were not tied down. But why she? Or had they refused to be tied down on the spot? While on this embarrassing enslavement, this colt must have suffered a lot of ridicules and embarrassing comments from her freely roaming friends who would have spoken to her pitifully about her undue restrictions.

She must have fought within herself the temptation to go wild and enforce her liberty. But she was there where the disciple came for her.
Have you experienced this in an office situation? Your co-workers were embarking on a dubious administrative actions that you were not free to be involved in. They were making a success out of the actions and it seemed you were a fool among the wise. On several occasions, you have been pressurized by them and by domestic and financial pressures to change your mind, but you chose to be a fool again and again till you began to feel you were making some mistakes. No, you are not. You were only tied down for the Master’s use.

You are a female staff in an office that has your boss haunting you for a relationship. You would have been long promoted if you had bowed to his demand. You would have been more financially and materially rewarded if you had agreed to be his partner in his sinful business, but you have consistently turned him down and things has not been getting easier for you in your office. Your friends and colleagues have advised you to cave in and loosen up. You are almost resisting being tied down indefinitely, because you are almost thinking you have been a fool all along. No. You are not.

You would have scored good grades if you had done what the lecturers demanded. You would have been in Europe or America if you have agreed to falsify the Visa Applications and submit falsified documents. You could not collect bribes like your fellow staff. You could not join them to falsify figures. They were having it smooth, but you are having it hard. Your friends and parents had called you a fool. You had wondered if they were right. Were they right? No. You were only being tied down for the Master’s use.

Mark 11:4-8
4 So they went their way, and found the colt tied by the door outside on the street, and they loosed it.

5 But some of those who stood there said to them,
“What are you doing, loosing the colt?”

6 And they spoke to them just as Jesus had commanded. So they let them go.

7 Then they brought the colt to Jesus and threw their clothes on it, and He sat on it.

8 And many spread their clothes on the road, and others cut down leafy branches from the trees and spread them on the road.

Then, the appointed time came. The Master sent for the tied down colt. They loosed it. When your time comes to be loosed, no one will be able to hold you back, because your time has come. Oh! Her moment of glory has come at last. Jesus wanted to ride on an ass to Jerusalem, it must be the one that has been prepared, the one that has patiently suffered some ridicules and embarrassment of waiting. It must be the colt that has been restricted from all negative influences around. The colt had thought she was a fool.

Can you imagine, the ass was no longer walking on the dirty ground. Do you know what that means? Red Carpet, Prestigious treatment for the vessel that carried Jesus to another place. Wherever the Lord was going, this colt was qualified to be there, she had paid the price of patience.

Oh! where were all those friends of hers who said she was a fool to be tied down? Where were all those fellow co-workers who were making jest of her for not resisting her enslavement? May your payday come too.
As Drama Ministers, we could not claim a lot of our rights. We have been advised severally by different people to find ways of monitizing this gift the Lord Has Giving to us. Our movies would be completed and many people would take them to show before thousands of people at crusade grounds, without coming back to bless us with part of the honorarium the organizers had given. You are invited for drama ministrations in churches and in long distant places only for the hosts to give you a “God Bless You” appreciation afterwards without any financial honorarium. Yet, you are not ministerially permitted to protest or fight. If it were in the secular circle, they would have demanded for their charges before the event. But no so with us in ministry, because we are tied down.
Pay day will always come.

Galatians 6:7-9
“7 Do not be deceived, God is not mocked;
for whatever a man sows, that he will also reap.

9 And let us not grow weary while doing good, for in due season we shall reap if we do not lose heart.”

When Joseph became the Prime Minister of Egypt, both Potiphar of his lustful wife were under his command. He had disobeyed his master’s wife because he was tied down for the Master’s use. However, it was Samson who thought he was being unnecessarily restricted, He broke himself loose and was freely going in and coming out of the harlots’ house while carrying about the anointing of God. He was anointed as the deliverer of Israel, but he never stayed tied down. He loved the Philistine ladies till he was entrapped and captured to dance ridiculous dance in the presence of their gods. He was messed up. His eyes of visions were plucked out and turned to a grinder of grains in the enemies’ prison.

Are you becoming wearied of being tied down? No. Receive grace. Receive strength. Receiving OPEN DOORS into ministries and promotion in life is not about fasting and praying alone, it is also about receiving grace to wait for His appointed timing. The grace to stay calm till He comes to release you into your moment of glory. People, friends and relatives who had thought you had been a fool would later come to honor the God you serve when they see what He has done for you. But you have to give the Master that opportunity to glorify Himself in you, by staying calm tied down under His command until He sends to release you into your glory. 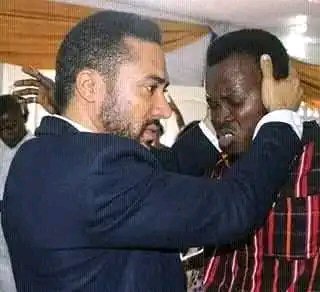